Approximately 3 million (living) people inhabit the vibrant South American cultural hub of Buenos Aires, capital of Argentina. But, before exploring the living, I’d like to share a visit to the Cementerio de la Recoleta.

The Recoleta cemetery covers over 14 acres, containing thousands of mausoleums, statues and monuments. It is an oasis filled with tiny, often ornate, houses for the dead. Mausoleums can house whole families. Their personalities, social status and cultural mores are showcased by decor. Cementerio de la Recoleta is known as the burial place for Argentina’s rich and famous, although some of the interred are neither rich or famous. Included among the non-living is the country’s beloved Eva Peron (nee Duarte). Think Andrew Lloyd Webber’s broadway musical and the movie version starring Madonna. To ensure the protection of  Evita’s remains, she was nestled in a fortified crypt and buried more than 16 feet beneath the earth’s surface. Another cemetery resident, Isabel Colonna, was only six days old when she died. She was reputed to be the illegitimate grandchild of Napoleón Bonaparte. Luis Firpo was a famous Latin American boxer, known as the Wild Bull of the Pampas. Forty three years after his death, Luis was included in the list of 100 greatest punchers of all time. The roster of residents in Cemeterio de las Recoleta is expansive. Argentina reveres its cultural icons. 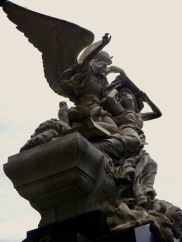 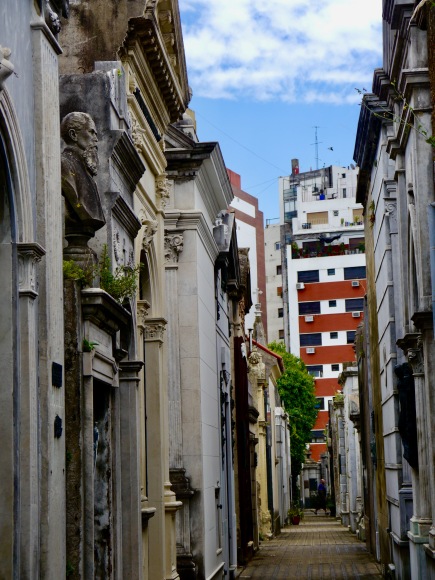 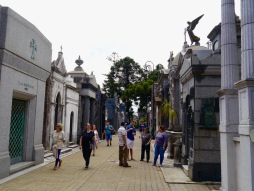 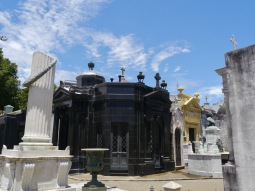 The walled city of the dead contrasts with the abutting towers that house Buenos Aires living. Like most cities, BA is divided into neighborhoods. The cemetery is located in the Recoleta barrio. On weekends, the park in front of the Recoleta cemetery transforms into a crafts market where local artisans hawk their wares. The market starts and ends early. If you want plenty of time to peruse the goodies, don’t do like we did and sleep half the day away. 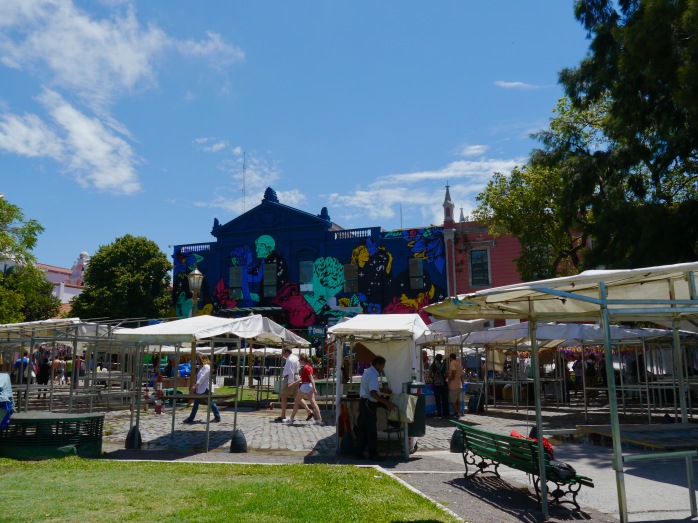 A bit of Argentinian history

Like most of the Americas, Argentina was originally inhabited by indigenous people.  In 1536 the Spaniards arrived, but were quickly run out by the Queradi. Around 20 years later the Spaniards gave it another try. This time with more success. The city of Mendoza was founded in the west, not terribly far from modern-day Santiago Chili. Later the Jesuits arrived and build missions. Spain tired of the Jesuits and in 1767 they were ousted by the Spanish crown. In the early 1800s the Brits arrived and tried to take over, but were defeated. The city of Buenos Aires declared its independence from Spain in around 1810. The independence movement from foreign occupation spread throughout South American. In the mid-1800s a “forward thinking” fellow was elected President of Argentina. President Mitre ramped up public education and welcomed the Europeanization of the country. Immigration dramatically increased and the melting pot of Argentina grew. By the late 1800s Buenos Aires’s population was 670,000. Around that same time the Tango was born! In 1946 Juan Peron was elected president. First lady Evita created social assistance programs and helped lower class women and children, winning the love of the people. Evita died young and Juan couldn’t handle the job without her. In 1955 the country slid into recession. Then there was a military coup. From 1976-1983 the country launched into the “Dirty War” and an estimated 30,000 citizens disappeared. By 1989 inflation had reached 200%. Corruption reigned and the public coffers were drained. President Christina Kirschner reputedly robbed the country blind. In 2015 Macri was elected president. The country struggles to find economic stability. Government programs are being cut and the local currency is on a valuation roller coaster. Meanwhile, the lovely vibrancy of Buenos Aires and its resilient people shine through.

On our second day in Buenos Aires we took a three-hour urban art tour hosted by Graffittimundo. The tour showcased graffiti hotspots, teaching about the artists and the social circumstances leading to the birth of graffiti art in Buenos Aires. The tour lasted three hours and is on my list of a must do when visiting the city. Graffittimundo is a non-profit serving the urban art scene. All proceeds from tours and events are funneled back into their mission. Our tour began in the Colegiales neighborhood. We wandered the Palermo Hollywood neighborhood and ended in Palermo Soho at a graffiti adorned bar and artist operated gallery in the rear. Not only was the tour a great way to see samples of various styles and periods of graffiti art, it was a fun way to be introduced to some of BA’s hipper neighborhoods.

Once street art becomes public, it is subject to alteration and is frequently tagged by other street artists. To many, this alteration is disrespectful to the original artist. And, perhaps it is. But in reality, the art is in the public venue and stuff happens out on the streets. An interesting exception to tagging public art exists. Note the floating scarf images. These are revered and never adulterated by others. 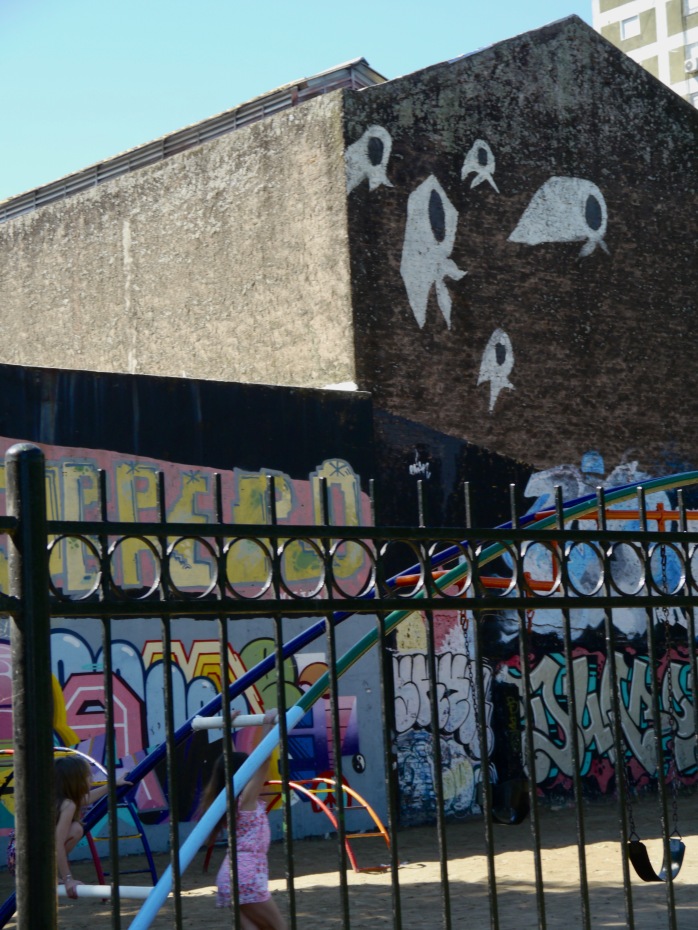 The Mothers of the Plaza de Mayo is a group of women whose children and grandchildren disappeared during the 1976 – 1983 “Dirty War.” Only a handful of the  disappeared have been recovered. The women of the missing have not stood by in silence. They began their quest to learn what happened to their loved ones while the war was still ongoing. It was a very dangerous time to speak up against the government. These women did not care. Their mission remains. Organized marches are held weekly,  demanding details about lost family members. Government denial and minimization of the numbers continues. Protestors wear white scarves, which have become synonymous with the search for answers about the missing.

Graffiti art has been embraced by the city. Each depiction has a story to tell. Police may stop and watch as a creation is being made. No altercations, handcuffs or squad car rides. No problema! 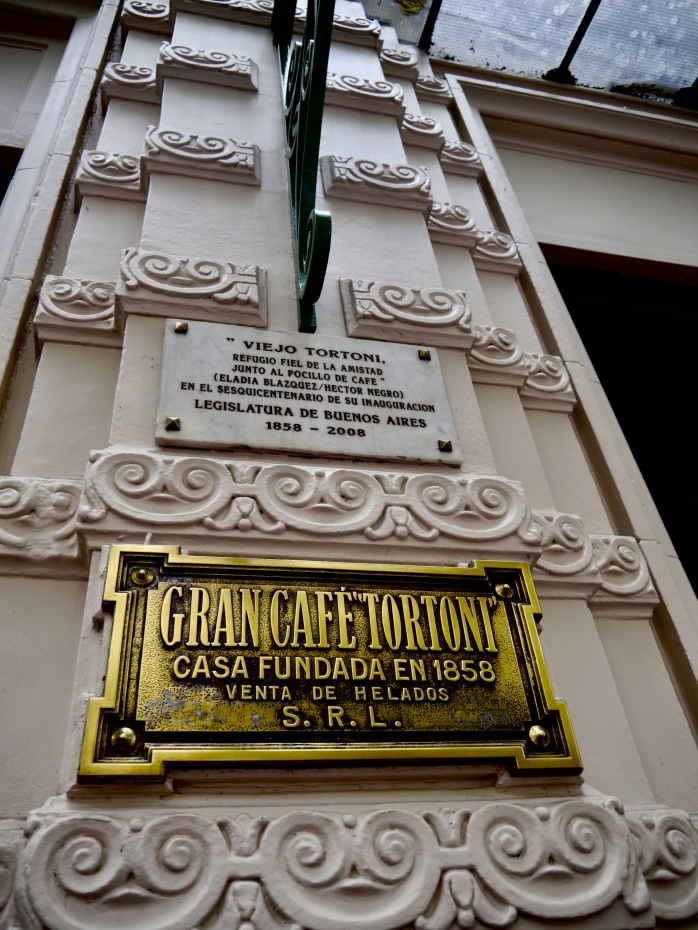 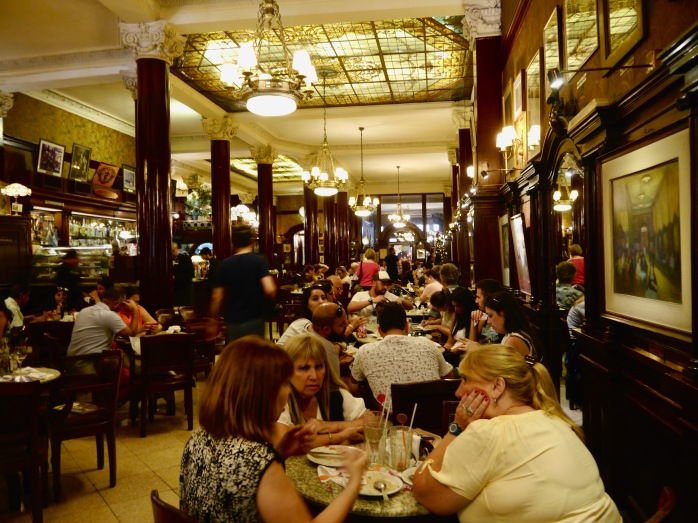 Gran Cafe Tortoni is touted in guide books as the most reviewed cafe in Buenos Aires. We bit, arriving at 2:00 pm to a long line stretching down the block. Wait time, one hour. Our travel partner, Jody, had targeted the place and goaded us on. Her husband Steve, not so sure. After some feet shuffling, we joined the queue. All of us were super glad we did. The place is amazing! Not the food so much, although it is just fine. The cost of a table and meal is the price of admission. The entire cafe is an impromptu museum filled to the brim with original art and memorabilia from the global arts scene, starting in 1958 and spilling forward to current times. Wander the back rooms. Don’t be shy. Take time to look upward at the original stained glass ceiling fixtures. Peruse the glass fronted curio cabinets, chock filled with photos and newspaper articles. Check out the original art work gifted to the owners and crowding every space along the walls. I spent more time wandering around than sitting at the table. Do be aware, as you will need to dodge tray laden impatient waiters rushing about to accommodate hungry diners. And, resist the urge to succumb to a sense of impolite unease as you look over the heads of other diners at the art. Your discomfort will be rewarded.

The Catedral Metropolitana was build in around 1827. Not surprisingly, it is in pristine condition and quite beautiful. The guarded remains of Argentine Liberator General Jose de San Martin are interred in a grandiose marble mausoleum. Two guards frame the doorway stand motionless as visitors walk past taking photographs. 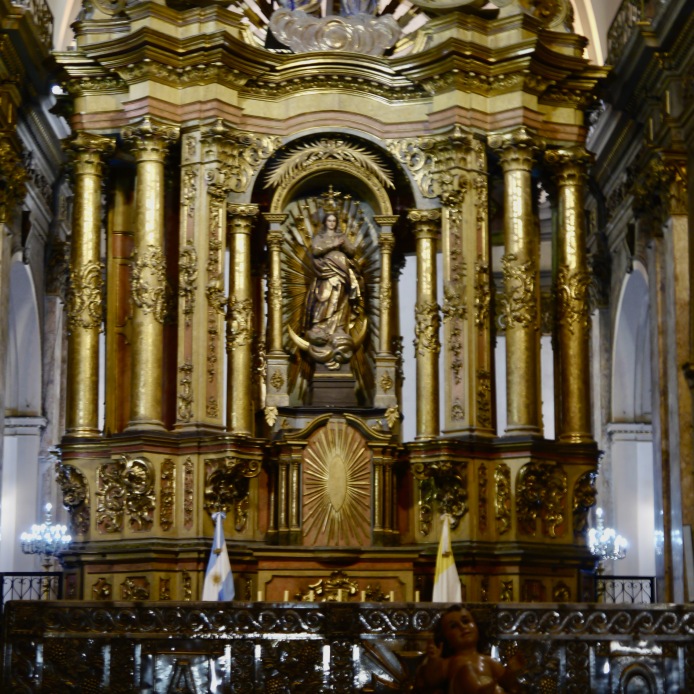 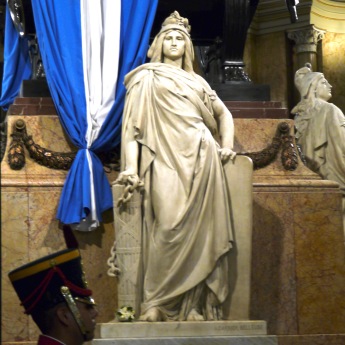 The Theatro Colon (opera house) is a must see. Several months before traveling to BA, Conde scored tickets to a sold-out performance of the Nutcracker. Only $25 per person. Beyond worth the price of admission. We celebrated December 30th with a 5:00 pm matinée. The performance was absolutely lovely and a great way to usher in the new year.  If you can’t get tickets to a show, the Theatro has guided tours. No expense was spared in its construction. It’s beautiful inside and out.

The La Boca neighborhood is a hotspot for tourists. El Caminito, a cobblestone street near the southern edge of La Boca, is at the heart of the action. Caminito was originally home to sailors working the harbor. They painted their homes with left over paints, creating an  unintended eclectic bright-colored area. When the harbor wound down, community members capitalized on the unique nature of the area, keeping the festive bright colors and turning the area into a very cleaver tourist destination. I wanted to check it out. My three travel partners were good sports and went along. Unfortunately the museums in the area were closed for the new years holiday. I enjoyed El Caminito, but would put a visit near the bottom of the list, unless you are a big shopper.

Taking a break from the city, we booked a tour of the historic town of San Antonio de Areco and a visit to an Estancia. Guillermo González Guereño, proprietor of  Camino Pampa, accommodated us with style. His driver Juan picked us up at our hotel at 8:30 am. and dropped us off at around 7:00 pm. It was a fun day.

Characature of a gaucho 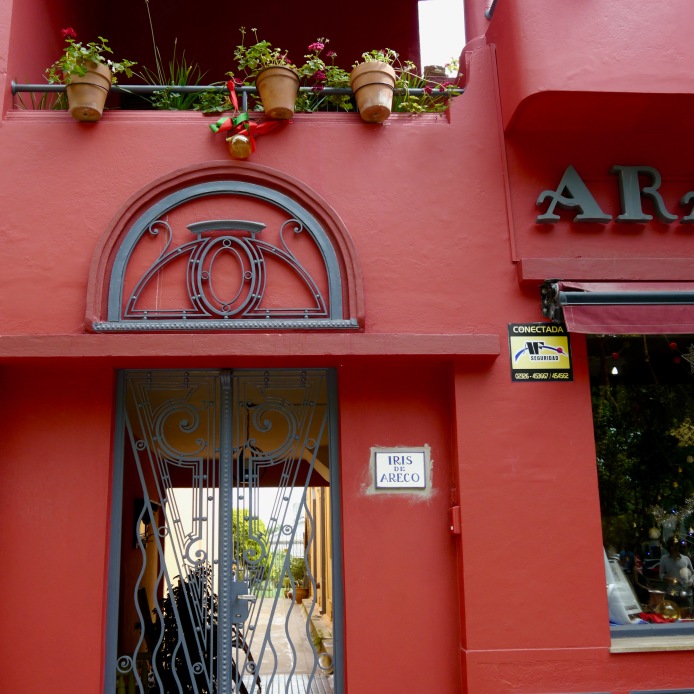 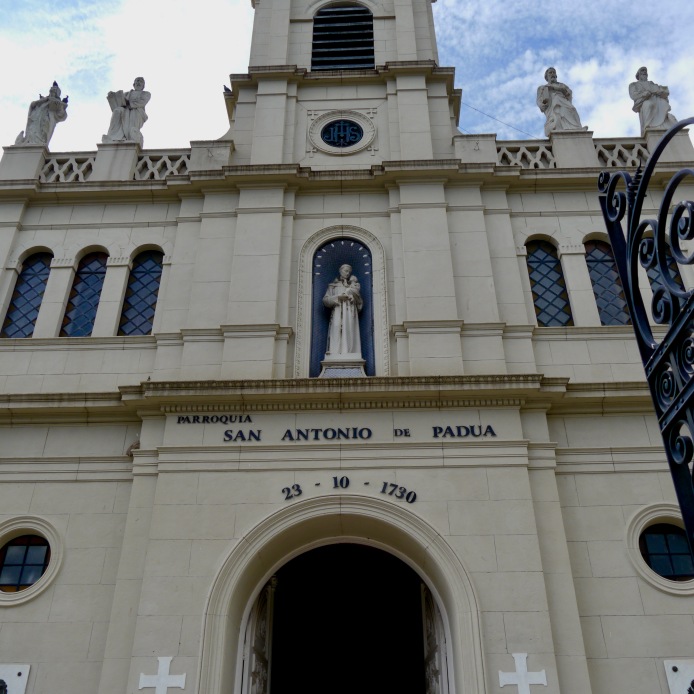 San Antonio de Areco, named for the town’s founding estanciero (ranch owner), is a small gaucho town with cobble-stoned streets, a town center park and lots of history.  It was developed in the early 18th century and preserves many traditions of the gaucho and criollo cultures. Gauchos were nomadic horsemen who lived in the pampas. They still prosper, but are no longer nomadic. In San Antonio de Areco, there is an annual festival called the Dia de la Tradicion (day of tradition). The town hosts the largest gaucho celebration in all of Argentina.

After leaving the town, we traveled to an Estansia. The last couple miles of road was heavily rutted mud, worsened by a torrential thunder storm. We had to transfer from the van to four-wheel drive vehicles. The crazy sideways sliding towards a ditch was akin to a carnival ride. Well worth the price of admission. Once at the Estansia, we rode horses, gorged on traditional barbecue and danced.

We are off to Patagonia, Uruguay and then more of BA. Stay tuned!

If you would like to see when new post is made, scroll to the top right and sign up.  You won’t get harassed. You will get email notification.

Thanks for joining my adventures.  See you next time!

For All You Geezers on the Go – Keep On Keeping On!