The morning of my 62nd birthday, we boarded a huge ferry in Montevideo Uruguay for a 2½ hour ride on the Rio Plata back to Buenos Aires. Buquebus has high-speed catamaran ferries (and bus services). We reserved seats on a ferry with a 1,000 passenger capacity and 150 spaces for cars. They have first, business, and tourist class reservations. There are small cafes on the boat’s multiple levels and, of course, duty-free shopping. Before boarding we went through customs, stamping out of Uruguay and at the next window we officially entered Argentina. The Buquebus online reservation system is a breeze. There are comfortable secured lobbies with easy baggage check systems. The only caveat when traveling between BA and Montevideo is the bus/ferry option versus the ferry only option. If opting for the bus/ferry option, you take a bus to Colonia and then the ferry across the river to BA. It’s a few hours longer, but gives an option to poke around Colonia for a short while, if you haven’t already.

We were back in Buenos Aires by 2:00 pm. The first cab we hailed tried to gouge us. We politely declined and hired another ride. In spite of the bad rap about BA cab drivers, this was the only time we experienced a problem. I’m a fan of the cab drivers in BA.

Jody and me in Steve and Jody’s apartment.

The exterior of The Poetry Building. Our apartment was on the second floor with balconies.

I became very adept at saying the address in Spanish.

While in Buenos Aires we stayed at The Poetry Building. It’s a small property that rents first class fully furnished apartments with equipped kitchens. We found it perfect for eating breakfast in and for the occasional light meal when we tired of restaurants. The Poetry front desk staff were beyond helpful, especially with bridging the language barrier. Yani stayed late to help when we learned at 9:00 pm that our next morning flight departure time had changed from 11:00 am to 4:00 am. With her help, we figured out why and bit the bullet. Who needs sleep anyway? The Poetry even has a roof-top garden where guests can harvest fresh seasonal produce. I can’t say enough good things about the place. 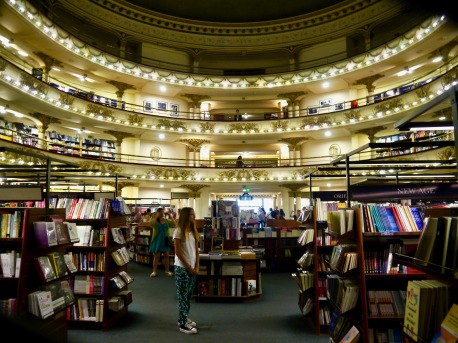 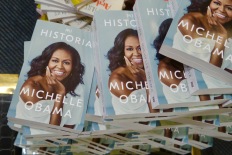 El Ateneo Grand Splendid is a huge bookstore housed in a beautifully restored theatre in the heart of Recoleta. The stage has been repurposed as a coffee shop. The pile of Michelle Obama’s Spanish translated memoir was at least 4 feet high. It is well worth a visit to the bookstore just to browse the venue. 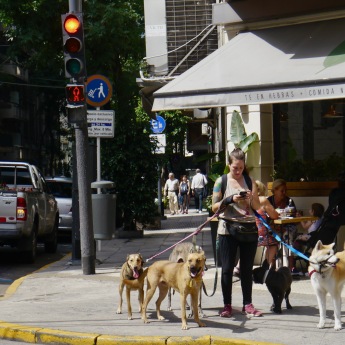 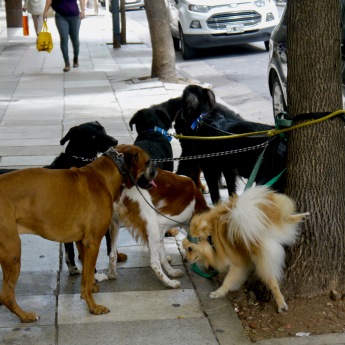 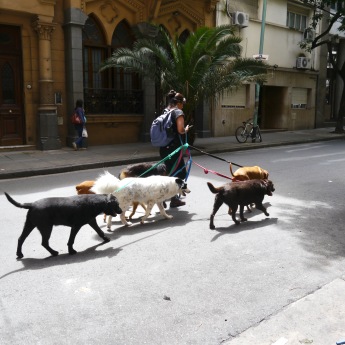 Dogs are clearly embraced as family members in Buenos Aires. The city is filled with apartment buildings housing busy dog parents. The dog walking business is booming. Clients are tied to trees during drop-off and pick-up. I didn’t see any conflicts. Yes, there is dog poop on the streets and you have to be careful where you step. But, the dog walkers try to minimize the problem, picking-up after their clientele.

Although huge, Buenos Aires is a very walkable city. With maps in hand we were easily able to navigate our way around. I never felt unsafe. We heard pick-pockets are the biggest threat. We had no problems, but heeded the warnings and were careful. Women frequently wear their purses across the body and you’ll often see backpacks worn in front. Flaunting iPhones, even to take photos, is a no-no. 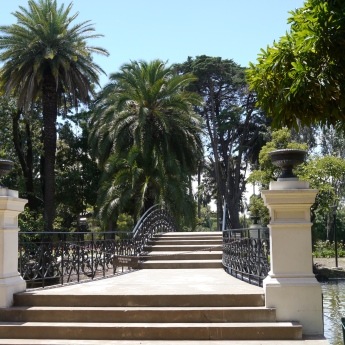 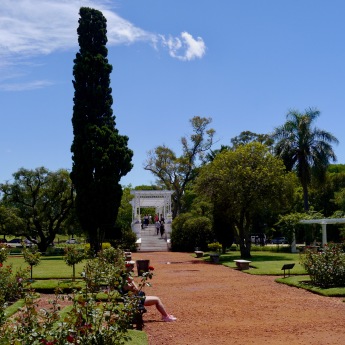 Realizing our days of warmth and sunshine were coming to a close, we spent as much time as possible outdoors. It took about an hour to walk from our apartment to the rose garden. It is a totally different experience than the Portland rose garden. Not better or worse, just different. A serene place to absorb heat and enjoy beauty while catching fragrant whiffs from rose bushes.

While meandering, we passed the Argentinian National Library. It was closed for the summer holidays. We wandered the grounds and learned about the building’s “harsh architecture.” The exterior reminded a bit of the LBJ Library in Austin.

After the library, we strolled a heavily treed street where many foreign government embassies in Buenos Aires are located. 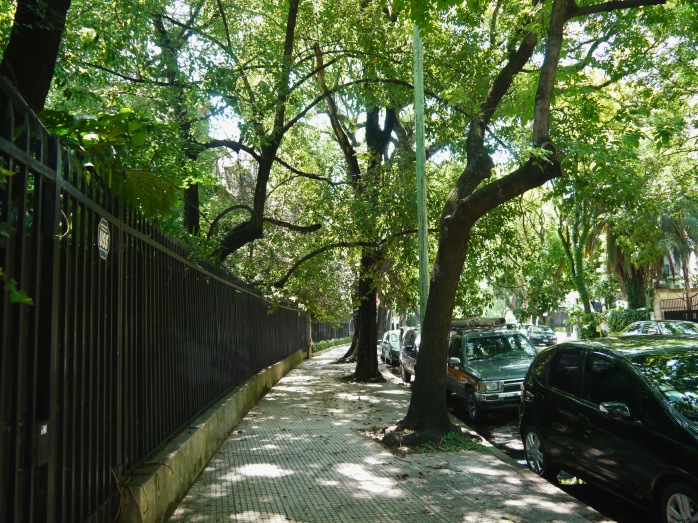 Not far beyond was our destination, the Museum of Latin American Art of Buenos Aires. (MALBA).

The interior of the building reminded us both of an improved version of the High museum in Atlanta. We were hungry, so decided to check out the museum restaurant before viewing the exhibits. It was great! I relished a quinoa salad and kale smoothie while Conde rocked-out on Belgium ale. Sated, we were ready for some art. I had no idea what I was getting into with Pablo Suarez Narciso Plebeyo. Whoa! This dude loves to shock! I held off on photos, but imagine (or not) very large graphic male genitalia and its multiple uses. Most of the pieces showed raw humor with egotistic genius.

The “Dirty War” in Argentina involved three succeeding military juntas, lasting from 1976 to 1983. Roaming Buenos Aires we encountered tiny reminders of that dark period in the country’s history. More than 30,000 individuals, deemed left-wing subversives, were “disappeared.” Unmarked Ford Falcons cruised the streets. Public kidnappings became the norm. Mostly young people, the disappeared were imprisoned, tortured and the majority murdered. Some lived to tell their stories. Young children of citizens labeled “subversives” were separated from their parents and given to supporters of the juntas to raise. To date, these children have not been traced or reunited with their birth families. It is a period of Argentina’s history that is minimized as you travel the country. I am of the opinion that history is more likely to repeat itself if we don’t openly and wholly acknowledge both the good and the bad. 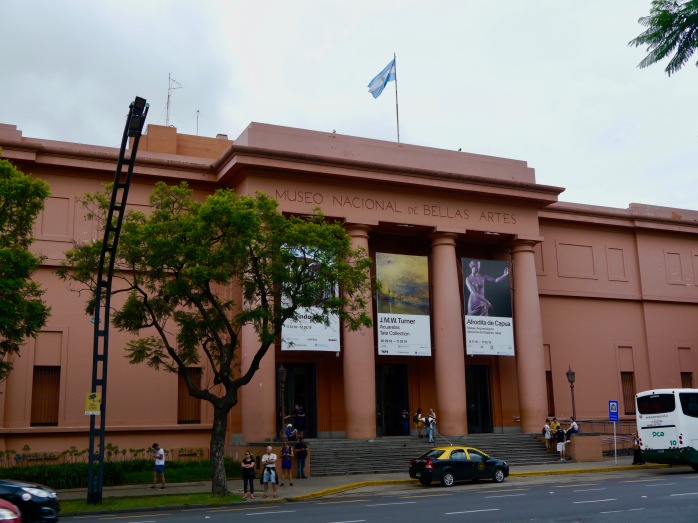 The National Museum of Fine Arts is first class. Once again, we were not charged an admission fee. The city definitely favors opening art to all classes of the public. The museum’s lower floors are devoted to many of the well-known masters from different periods. The upper floors are devoted to Latin American artists. If I were to have a “do-over” visit, I would start with the upper floors, to view the works of artists I was not familiar with.

This is Conde’s story: Casa Del Habanos is the worldwide Cuban cigar distributor, distribution, franchise and sales system, which in effect allows each region/city in the world to have an exclusive local Cuban cigar store and distributor. There is a Casa Del Habanos in Toronto, one in Hong Kong, at least one in Madrid, one in Paris, London, Rome, Vancouver BC, etc.  I found the only Casa Del Habanos in Buenos Aires, located in a formerly chic shopping area near Florida Avenue, not far from the Casa Rosada.  It has been there for over 35 years, and is the third oldest Casa del Habanos in the world, which is not surprising, because BA is one of the three or four most important  Spanish-speaking cities in the world. 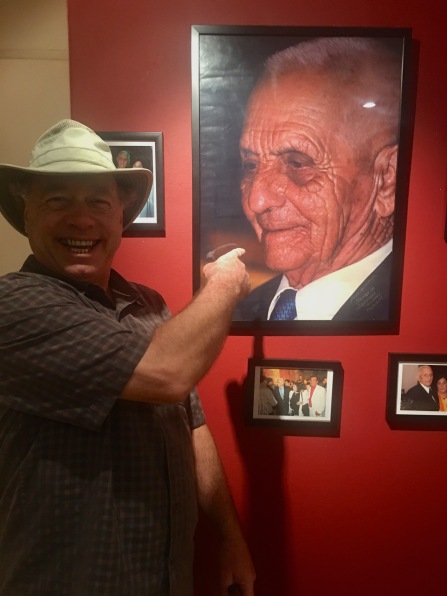 The store has a locked front door. Visitors are required to ring a bell for entrance.  The humidor has a nice selection of quality Cubanos, although not terribly large. On the wall are photos of Alejandro Robaina, one of Cuba’s most famous cigar makers. He visited the store in celebration of its opening 35 years ago. I visited with Mr. Robaina at his home in Pinar Del Rio, Cuba, in 2005, prior to his passing in 2010.  He was a delightful man,  perhaps the most well-known as an international good will ambassador for Cuban cigars. His brand of cigars, “Robaina,” are especially smooth yet richly flavored. I left smoking a “Short Churchill” by Romeo y Julieta, one of my favorites, which set me back about $14, a very good price for such a gem. When I go back to BA (hopefully soon), I will for sure drop by the CdH store very early on in the next visit, to stock up on some Cubanos.

The Museo Del Agua y de la Historia Sanitaria (Museum of water and history of sanitation) operates inside the Palacio de las Aquas Corrientes. The museum is only open a few hours a day. The exhibition is quirky and filled with tidbits about the construction of the palace and its inner workings over the years. Here are a few photos from the exhibit. Hoover over the photo to get a caption to appear. Blog magic!

This Mercury Vapor Valve came from Great Britain in 1948. It was operational in the water system until 2000.

All sorts of bathroom fixtures grace this exhibit.

Water valves from all over the world can be seen. 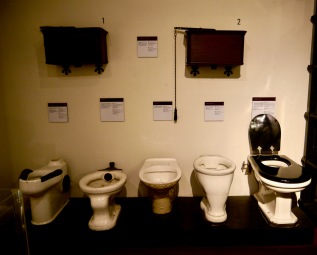 A selection of commodes and bidets are on display. 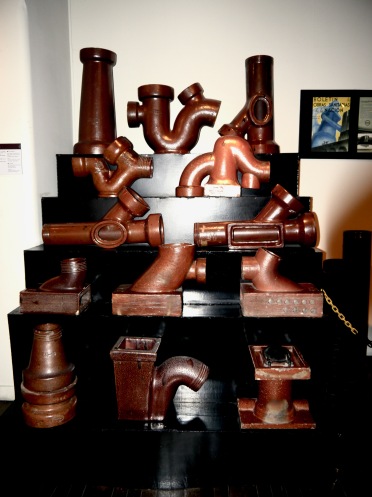 The Obelisk was erected in 1936 to commemorate the city’s quadricentennial. It is a national historic monument and an icon of Buenos Aires. Think the Arc de Triomphe in Paris or the Lincoln Memorial in Washington DC. It is located at the Plaza de la Republica at the intersections of Avenues Corrientes and 9 de Julio. Not noted on the Obelisk is an incident that occurred during the Dirty War. In the early morning hours one Sunday, citizens witnessed a man wrested from a green Ford Falcon, tied to the Obelisk and machine-gunned down. Perhaps a memorial honoring his life and shunning that period will someday be added at the Plaza.

On an afternoon graced by torrential rains we visited the Museo Evita. It was opened by her grandniece, Cristina Alvarez Rodriguez, fifty years to the day after Eva Peron’s death. The museum is housed in a 20th century mansion, which was declared a National Historic Monument in 1999. It is lovely to walk about and is filled to the brim with everything Evita. If you weren’t in love with Evita prior to a visit, the exhibition does everything in its power to change your opinion. Definitely worth a visit.

We will definitely return to Argentina!

If you would like to know when new post is made, scroll to the top right and sign up.  You won’t get harassed. But you will get an email notification whenever a new post is made.

Thanks for joining my adventures.  See you next time!

For All You Geezers on the Go – Keep On Keeping On!