In 1968 my elementary school band played at a competition in Pittsburg. As part of the trip we were scheduled to visit our nation’s capitol. Then, Martin Luther King, Jr. was assassinated. As an eleven-year-old I did not understand the magnitude of this event. While riding in the tour bus through Pittsburg, I saw burning buildings and chaos in the streets. The trip was aborted and we returned to Atlanta. I was disappointed in not being able to see Washington DC. My father, a Delta airlines captain, promised to take me  there. He held true to his word and several years later the two of us toured DC. We visited Arlington Cemetery where I saw the Tomb of Unknown Soldiers. I remember the Capitol Building and its dome from the inside. We toured the Smithsonian Aerospace Museum filled with planes. My dad took me to the National Museum of American History where I saw the collection of first lady dresses. The tiny sizes of the early first ladies caught my attention. I remember feeling pride in my nation. I’m not sure if this influenced me, but I eventually got an undergraduate degree in Political Science and worked “in politics” for seven years before earning a law degree.

I returned with Conde to DC in the mid-1980s. The timing turned out to be a little off. Just before we arrived, the Reagan administration spawned a government shutdown. Not much was open. But, the Senate was in session. We easily entered the Capitol Building and were admitted to the visitors gallery without an official pass. We watched the proceedings from a birds nest view. It was a hoot to see US Senators from all across our country. Conde and I were equally excited as we pointed out members from both parties. It was kind of like visiting Hollywood and seeing lots of stars in one place. I wasn’t enamored by all of them, but still felt an immense respect for the institution.

Fast forward to June 2019. Conde and I visited long-time dear friends Steve & Jody. They have lived in DC for around thirty years and were wonderful tour guides and hosts. I took tons of photos and planned to immediately blog the trip. Only I couldn’t. I felt a heaviness in my heart about our current “political situation.” I could not disconnect this feeling from the brick and mortar of the city where so much discord is being unleashed, trickling down into our county’s fabric and arming so many with feelings of hatred and violence. Once I reconciled my need to express myself with honesty, rather than create a false patina, my writer’s block evaporated.

I wanted to visit the Capitol building. As the rotunda appeared in the distance I got pretty jazzed. But it turned out to be nothing like my earlier visits. We started at the building’s main entrance before learning we needed to go through the visitor’s entrance. Herded in a circuitous route far away from the building, we were directed through muddy grass, past hurdles and finally entered impressive security checks. When I asked a question, the heavily armed guard was rude and surly. I totally get the need for security, but why be rude during the process?

Upon entering the visitor’s center we learned tour tickets only included a tiny portion of the building. To visit the House or Senate gallery we would need to get passes from our elected representative in advance. There was a four hour wait for the mini tour so we left, my sense of pride and ownership soundly eroded by the whole experience. This was no longer “my” Capitol Building.

I recently read that the members of “the squad,” a group of newly elected women of color to Congress, were fielding daily death threats. Why? Because people don’t agree with their politics? When did fear become the emotion de jure rather than a backdrop? When did acts of violence become the norm? I place a huge amount of blame directly on the shoulders of our current President. Daily I am mortified by his undignified tweets and lies. But mostly I am shocked by his complete and dangerous lack of respect for our constitutional structure of checks and balances among the branches of government. I didn’t want to write this blog because I did not want to say these things. But I couldn’t write this blog without speaking my truth. 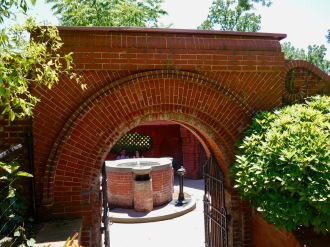 It was sunny and humid when we left the visitor’s center. While cheered by the goose family headed for the fountains, I couldn’t shake my angst. Wandering down the west lawn of the Capitol Building we happened upon a lovely small red brick building. We learned it is the Summerhouse, designed by Frederick Law Olmsted. It was built in 1881 as part of a project to develop and improve the Capitol Grounds. The small building is hexagon-shaped with a surrounding garden and fountains. I learned Olmstead envisioned an oasis for visitors, providing rest and fresh water to drink. We joined another couple partaking in the cool quiet. Olmstead certainly achieved his goal. I felt refreshed after a respite. I wasn’t going anywhere near the White House, but I could approach other parts of DC with an open heart.

On to the Library of Congress. The original facade was completed in 1897 with annexes added to accommodate needs. It is reputed to be the largest library in the world, serving members of congress, committees, congressional staff and some areas of the public. It is an institution rich with knowledge. And the building is truly magnificent. 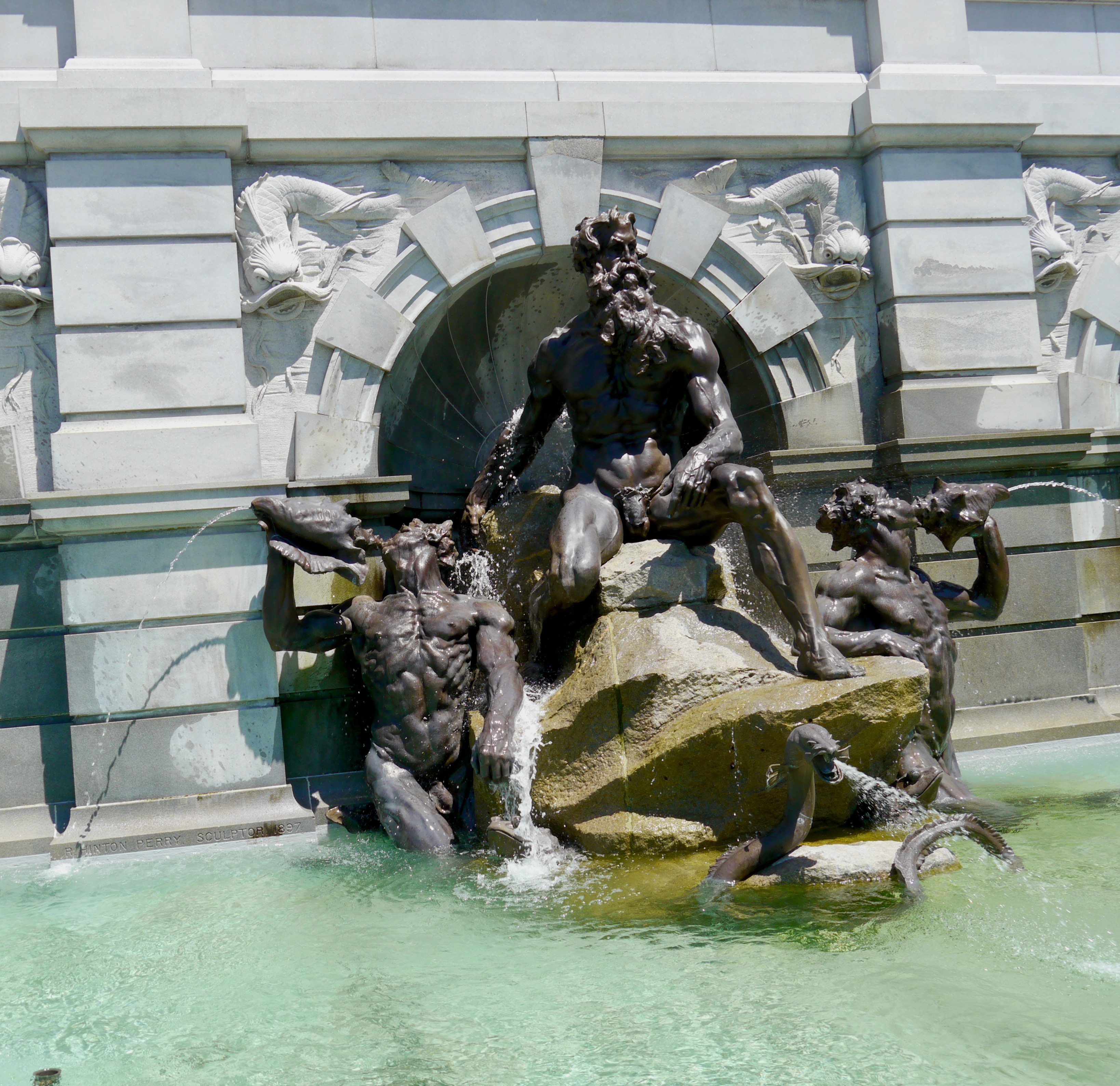 In front is the huge Neptune fountain designed by 27-year-old architect Roland Hinton Perry. His work inspired by the 18th Century Trevi Fountain in Rome. 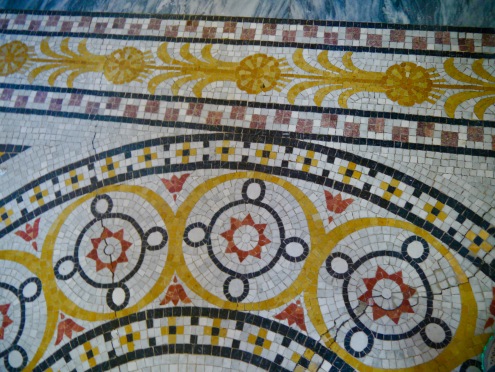 Inside there are elaborate tile mosaics, columns, and oddly shaped windows in huge spaces. Definitely eye candy, and the history isn’t so shabby either. The Library of Congress was created in 1800 when President John Adams agreed to a congressional act moving the US capitol from Philadelphia to Washington D.C. That bill allocated $5,000 for books to be used by the Congress. It was an era when education and literacy among the elite (read rich white males) was flaunted. Under Thomas Jefferson, Congress passed a bill creating the position of Librarian of Congress. The institution flourished. Originally there was a small library attached to the Capitol building. It was destroyed during the War of 1812 when the British burned the Capitol to the ground. In 1815 Jefferson sold his massive personal collection of books to the US for approximately $24,000. This collection populated the new Library of Congress. But, another fire destroyed almost 2/3rds of Jefferson’s collection in 1850. When we visited, there was an exhibit showcasing some of Jefferson’s original books. They were arranged by topic. It was illuminating to see his taste in literature. 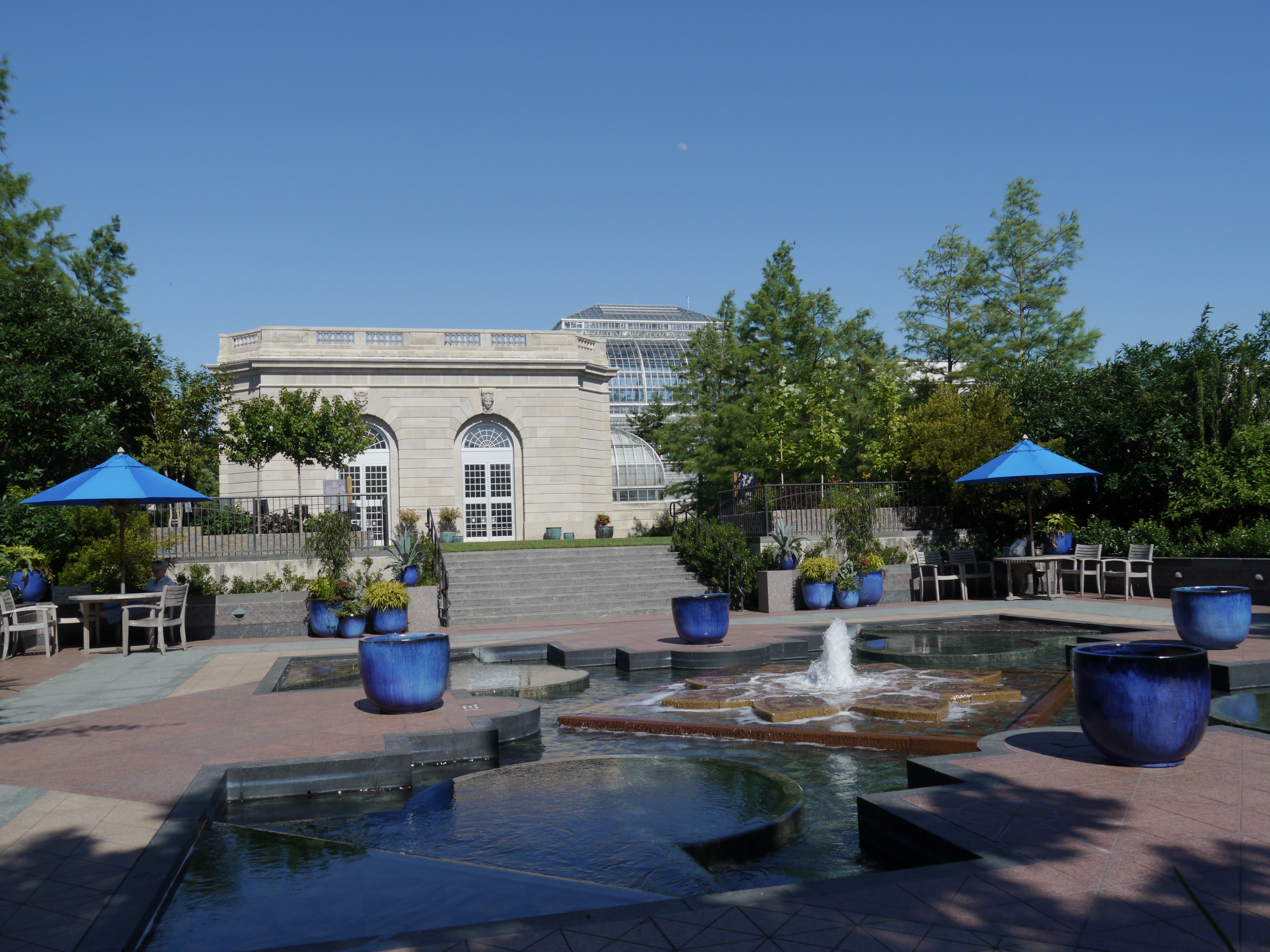 I absolutely loved the United States Botanical Garden Conservatory. I lost myself in the plants and calm while surrounded by the muffled clamor of the bustling city.

D.C. is an easy city to traverse. The metro (WMATA) is clean, timely, affordable and easy to use. And a fun place to take photos. Definitely a poster child for the potential success of mass transportation in the US. Never too late to start. How about we use The Wall money for a public mass transportation system instead? 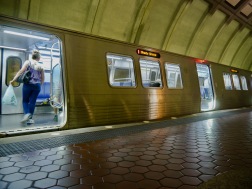 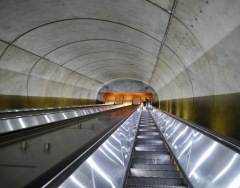 We indulged in the public museums. The Smithsonian web site alone lauds, there are “19 world-class museums, galleries, gardens, and a zoo.” It took me a while to get used to the fact these national museums and many historic sites have no admission fees – a use of tax dollars I wholeheartedly support.

I was enamored with the National Portrait Gallery. We entered through the events hall which was in full swing celebrating Pride Week. Music was blaring and blue lights illuminated black clad dancers strutting their stuff on tables scattered around the hall. People of all ilks watched and milled about. The events hall holds a full schedule of free events throughout the year.

The Experience America exhibit is eternally timely. During the 1930s President  Roosevelt incorporated art in the New Deal programs. For about 10 years, artists captured  the essence of the people and landscapes of America. Thousands of paintings, sculptures and mural were placed in schools, post offices and other public buildings showing the resilience of Americans during historically difficult times. Most of this art remains on view. 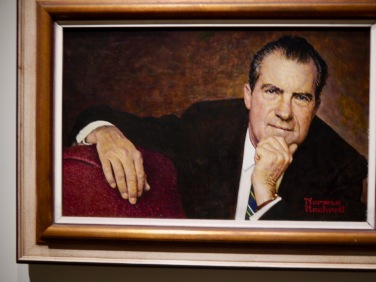 I lost complete track of time while perusing the Presidential Portrait gallery. Every single past US president is represented. The variety in artist style and choice of setting were fascinating. A Norman Rockwell depicting Richard Nixon. Abstracts of Bill Clinton and John F Kennedy. An array of Franklin Roosevelt’s hands included below his bust. Barak Obama’s portrait was the last in the series. As I turned the corner to find his painting, I simultaneously felt joy and sadness, remembering the integrity and dignity he and his family brought to the White House for eight full years. 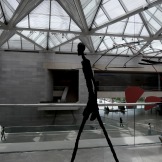 The National Gallery of Art is HUGE. It takes up three city blocks and is comprised of a West Building, East Building and a Sculpture Garden. We focused on the exhibits in the East Building. On the concourse level we meandered through “the Life of Animals in Japanese Art.” The name wasn’t a big draw for me, but once I entered, the 18,000 sq.ft. exhibiti sucked me in. The permanent collection has works by Calder, Rothko, Miro, Duchamp, Ernst, Warhol, Giacometti, Hopper… you get it. A veritable who’s who of art.

The Vietnam Veterans Memorial Wall was a huge draw for me. I vividly remember the controversy surrounding its creation. A contest was held and the winning design was created by 21-year-old Yale architecture student Maya Lin. She was a first generation American. Her parents, Chinese immigrants. The outcry was huge. Why wasn’t a “real” American selected as the designer. And why wasn’t a traditional memorial (statutes) erected instead. The bronze sculpture created in concession is of three soldiers. It is beautiful and true to the honor of those who served. And, I especially liked the interactive nature of the wall. The engraved names are accessible to both sight and touch. Visitors’ images are reflected as if they are united with those who were killed. The whole scene hits home the magnitude of that war and the immensity of resulting losses.

After a long day of museums and monuments, we dined on a small plate feast at The Dabney, located in one of many gentrified alleys in the DC area. 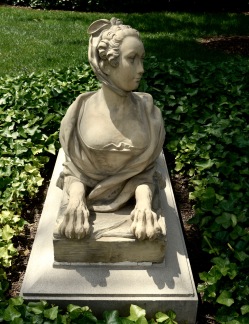 The Hillwood Estate, Museum and Gardens is a bit off the beaten tourist path in DC, located in the middle of wooded acreage along Rock Creek. Walking distance from our hosts’ home, I really enjoyed visiting and learning about Marjorie Merriweather Post, heiress to the Postum Cereal Company. She built that company into General Foods, Inc. Post’s former estate is now a museum, filled with art and her massive eclectic collections. A successful business woman and philanthropist who loved to entertain and live big, Post’s former estate is surrounded by lush gardens. And, there is a delightful cafe worth visiting. When we toured the property there was a memorable exhibit of the photography of Alfred Eisenstaedt.

Steve, Jody, Conde and I all piled into the car for day trips and a three night stay in Philadelphia. Sorting through my photos and writing this blog, I realized just how busy we stayed.

For all you Geezers On The Go – Keep on Keeping On!